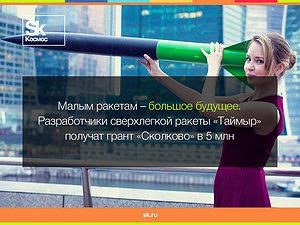 Developers of Taymyr microsat launch vehicle will be awarded a 5 mln grant.

The Space Technologies and Telecommunications Cluster of the Skolkovo Foundation has approved a 5 mln grant to Lin Industrial. The same amount is invested in the company by coinvestor Sergey Burkatovskiy.

To orbit with KOMPAS-3D 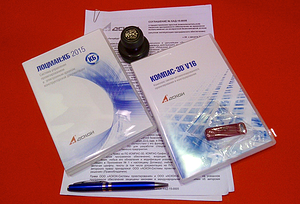 Russian company ASCON became a partner of Lin Industrial – a Russian startup developing microsat launch vehicles, a resident of the Skolkovo Innovation Center and the only private developer of space launch vehicles in Russia. 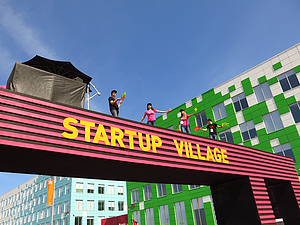 A cooperation agreement with a company testing electronics in space, and a prospective supplier of oxidizer for Taymyr launch vehicle — these are what our company got at Startup Village event held in June 2–3, 2015 in Skolkovo. 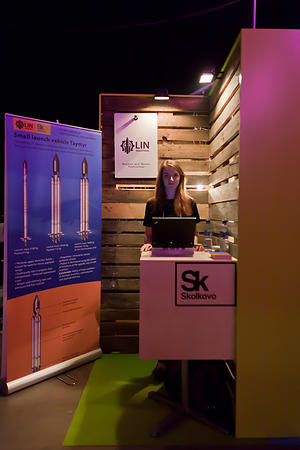 Slush-2014, a major startup conference, ended in Helsinki. 50 startups from Skolkovo, including our company, represented Russia in the battle for attention and investments. 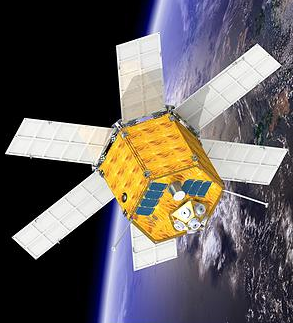 Lin Industrial and SPUTNIX have signed a cooperation agreement.

SPUTNIX is one of the first Russian private companies specialized in service systems for small spacecraft, microsat platforms based on these services, and ground equipment for satellite control and data receiving. 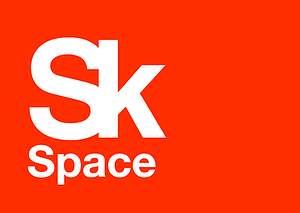 Our company has been granted the status of resident of Skolkovo Innovation Center!

In about two weeks you will receive the notice of readiness of the certificate of making a record in the registry of participants of the project for creating and supporting the operation of Skolkovo Innovation Center about granting the status of participant of this project.”