In late August we received all the components to complete the assembly of the engine test stand for testing bipropellant liquid rocket engines with thrust of up to 150 kgf. Shipping the necessary parts was delayed due to summer vacations of the suppliers staff. 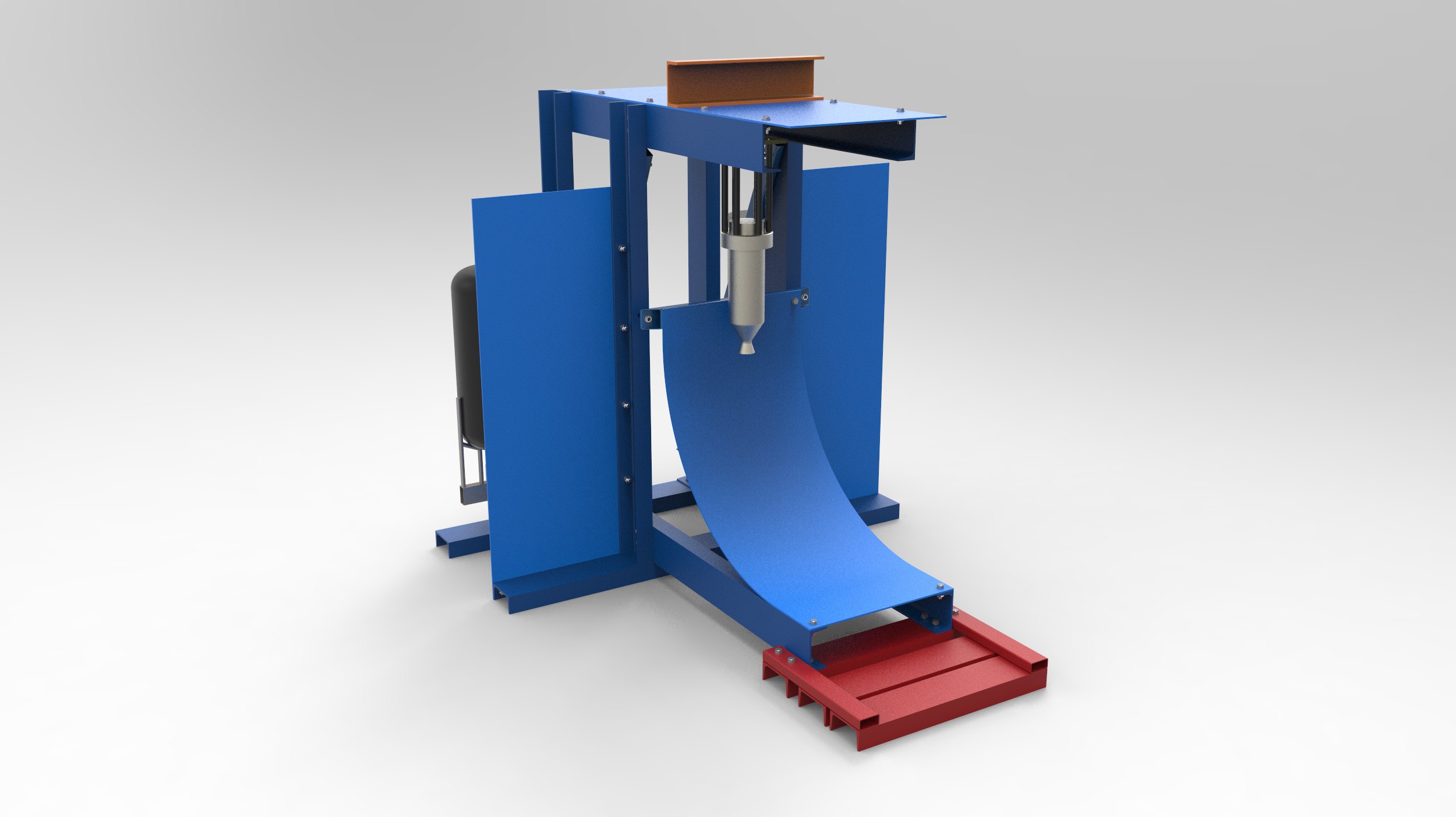 Sadly, we were not able to test our engine at the test stand of Department 202 of MAI - for technical (the stand needs repair) and political (their management prefers not to take risks) reasons. Companies of the industry dealing with hydrogen peroxide were willing to help us, but the price for the test in the "industrial companies" is about four times the cost of creating our own test stand.

Thus, we decided to assemble the engine test stand on our own. 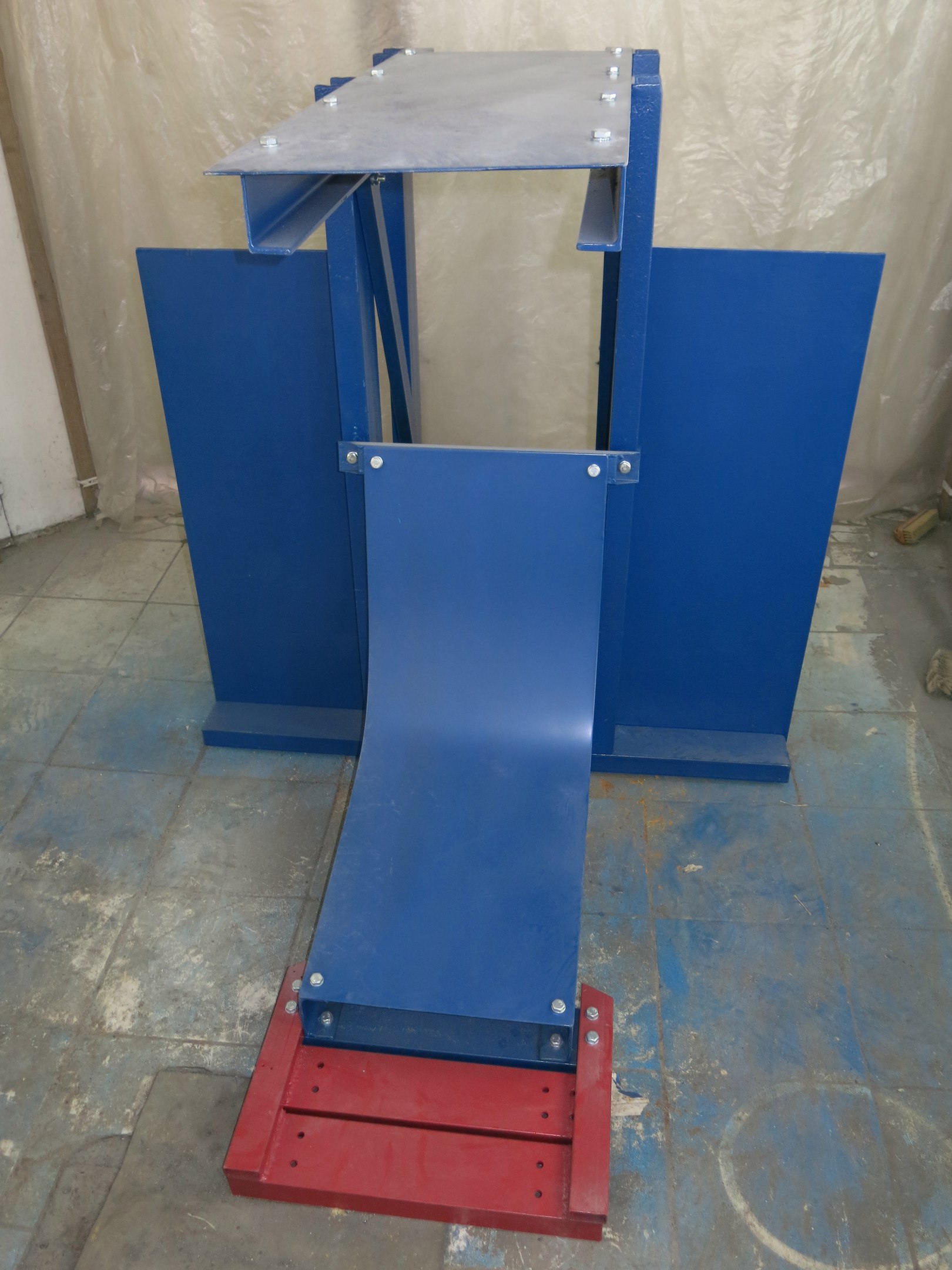 In June some metal was purchased for the structure of the stand, and assembly of the frame was started. In late August all other necessary components were received, making it possible to start the final assembly!

Let's consider the overall structure of the stand.

Propellants of RDL-100S "Atar" engine are 85-90% hydrogen peroxide as an oxidizer, and TS-1 kerosene as a fuel. 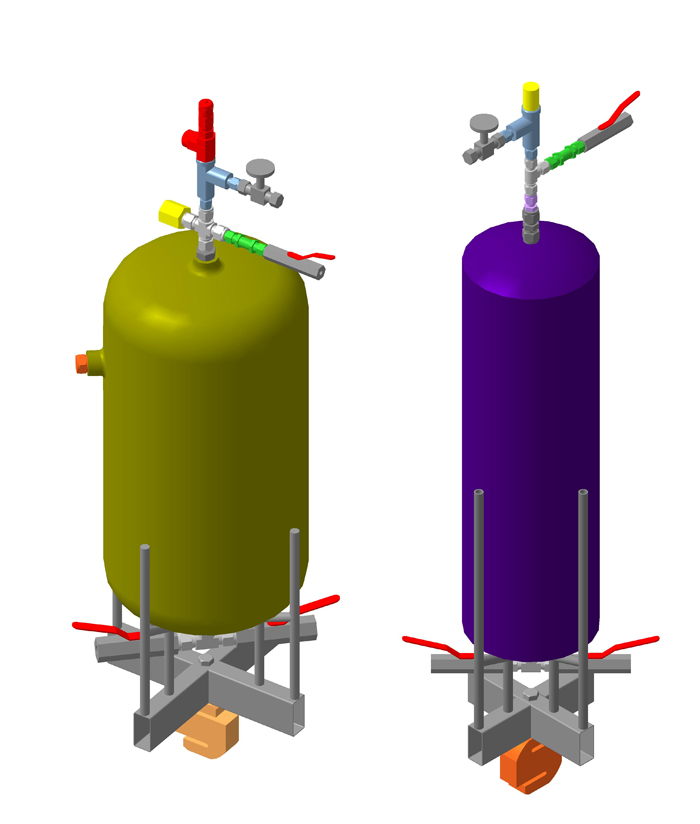 Four pipelines are mounted on the stand, feeding the propellants to fittings on the engine: two fittings to feed oxidizer and fuel into chamber, and two more - to feed coolant into upper and lower curtain belts.

Each of the pipelines is equipped with flow limiters - they will be calibrated with distilled water prior to using the test stand. 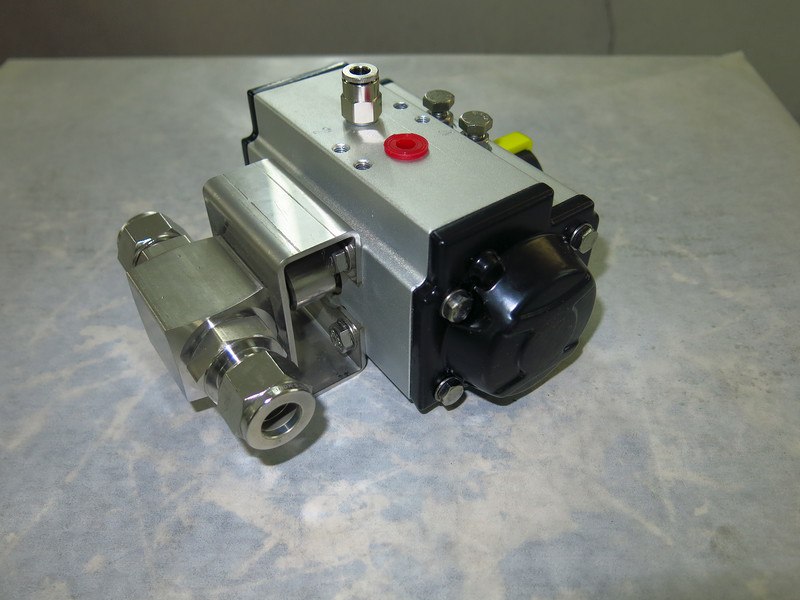 Let's consider the schematic diagram of the feed system and trace the operation of its main components. 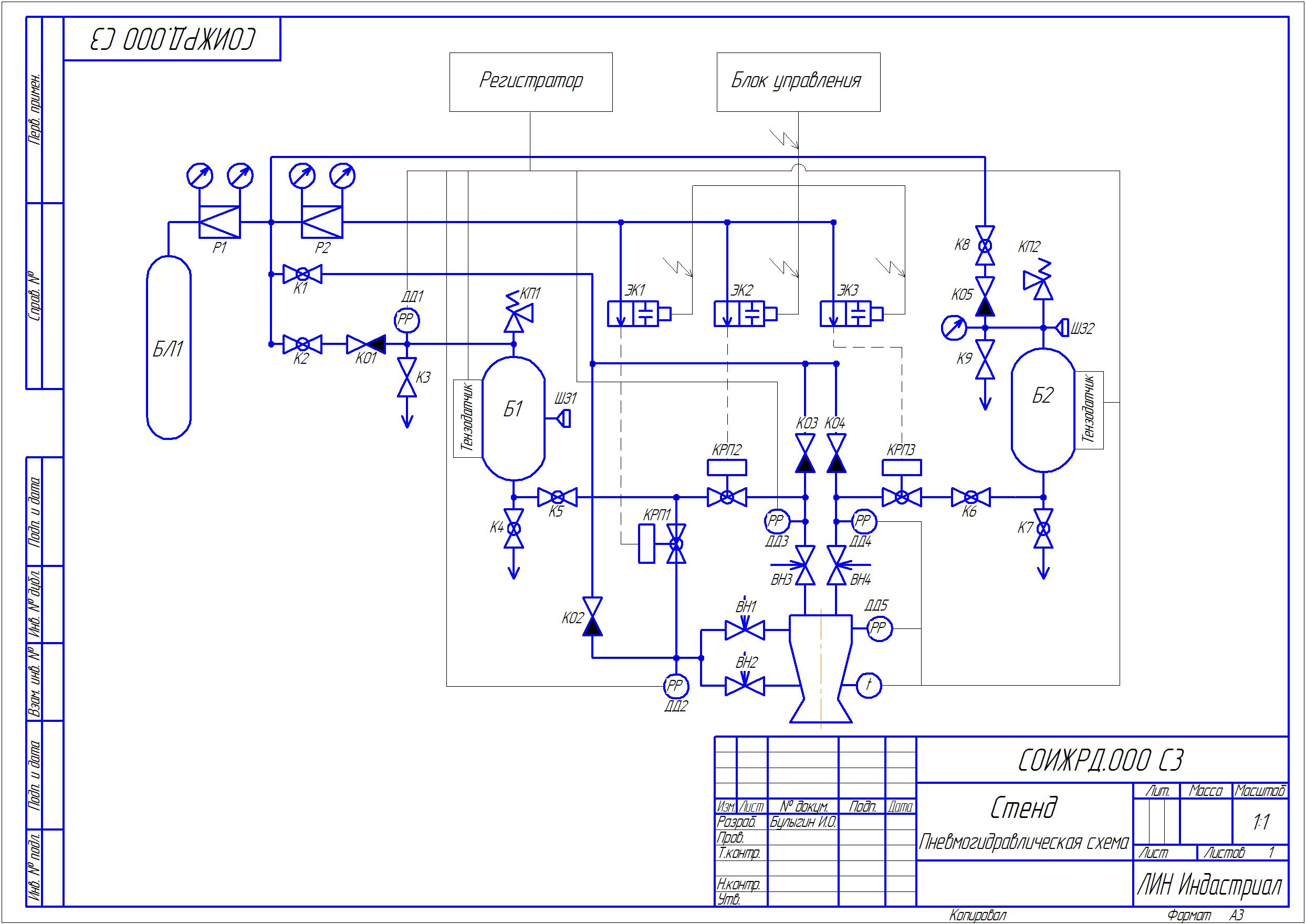 Nitrogen from BL1 (БЛ1) gas cylinder is used to pressurize oxidizer and fuel tanks; to control valves on the lines feeding main propellants and coolant, and to purge the lines of the test stand, injector head and coolant line of the engine.

Gas at 25 bar is fed through a pressure regulator into the tanks for pressurization, and at the end of the stand operation - into the pipelines to purge them.

The tanks are equipped with KP1 (КП1) and KP2 (КП2) safety valves. Presence of a safety valve is particularly important for peroxide tank - in the case of spontaneous decomposition of the peroxide this valve prevents destruction of the tank.

At the outlets of the tanks there are valves for draining residual propellants (including emergency drain). There are also valves on the propellant lines, which are to be opened before starting the operation. 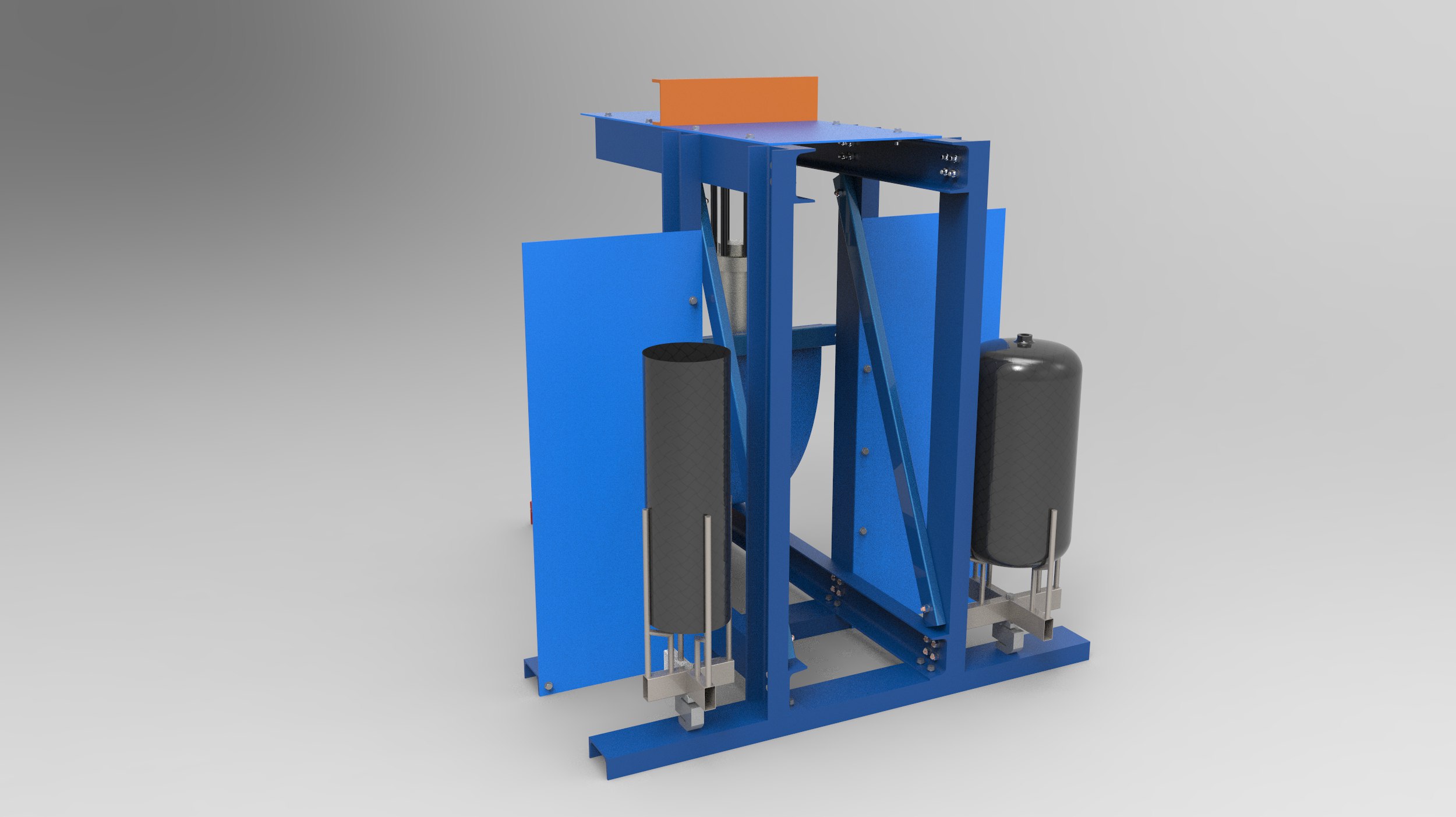 Filling the tank with hydrogen peroxide is performed through Sh31 (Ш31) fitting, and with kerosene - through a hole next to KP2.

Pressure sensors are installed on hydrogen peroxide tank, on the lines of propellants, and on coolant line where it enters the engine. There's no pressure sensor on kerosene tank - that pressure shouldn't differ from the pressure defined by the gas pressure regulator.

Additional sensor, connected through a Perkins tube for cooling the medium, measures the pressure inside the injector head of the engine.

Right under the tanks there are weight sensors (S-shaped strain gauges) to monitor the propellant consumption. The tanks are located behind the armored sheets, protecting the tanks from debris. 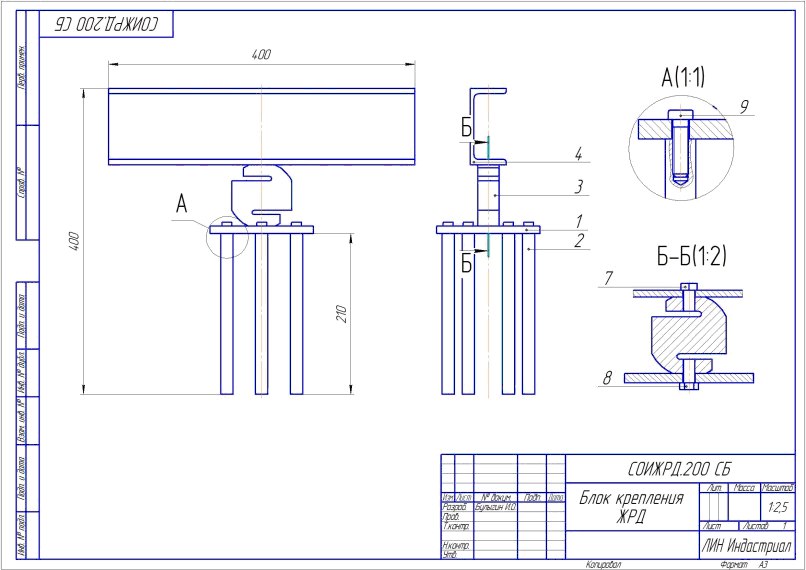 The engine is attached to a special structure above the flame deflector, and above the engine there is a thrust sensor (also S-shaped strain gauge). To prevent tipping of the stand when firing the engine, there is a pad of C-beams (seen as red) for placing a counterweight.

All sensor readings come into recording enclosure, equipped with industrial controller by OVEN company. Control of the valves on the engine test stand is performed with a special control panel, which has three switches, responsible for the feed of oxidizer, fuel and coolant. Besides, it has emergency shutdown button. 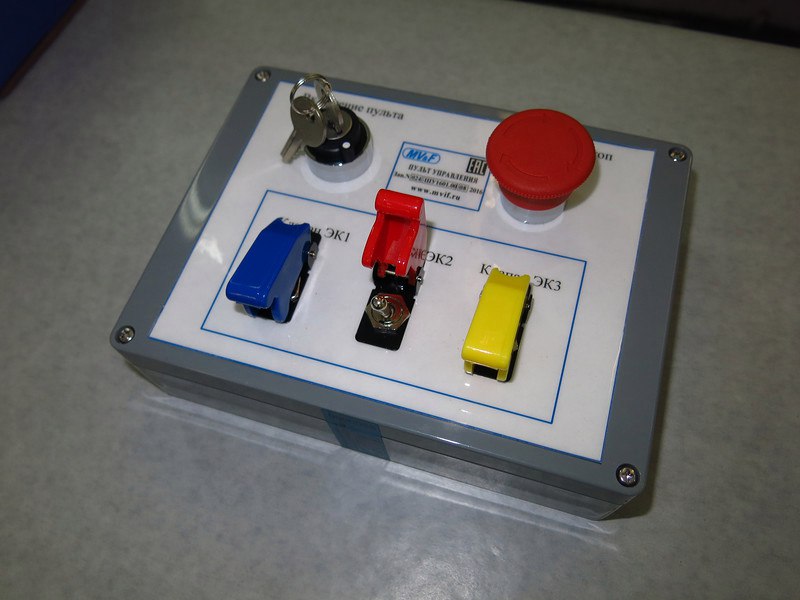 Ahead is the completion of assembly, early trials and cold flow tests with water!