Let's examine the flights in detail.

On April 23, 2016 we launched a rocket with a third-party developed CS based on Arduino and incorporating ideas of our Lead Designer for Control Systems Andrey Suvorov. From a practical standpoint, it is different in that the rocket engines were ignited not using wired remote controls, but via Wi-Fi.

The rocket was outfitted with four RD1M-300-0 solid motors manufactured by Real Rockets company from Russia. 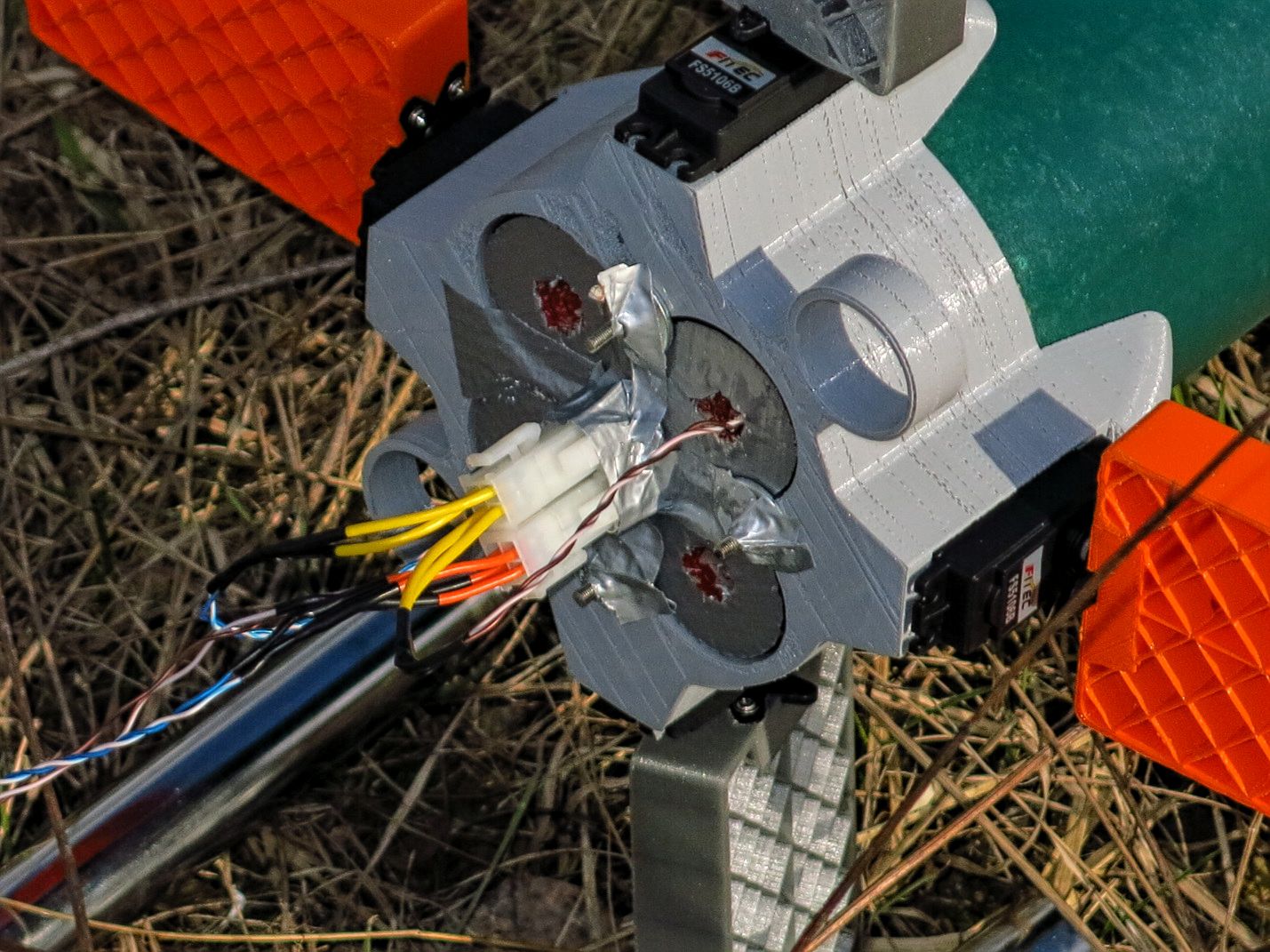 The motors differ from the previous model by slightly greater length, total impulse, thrust and shorter time to full thrust.

The motor modifications proved beneficial — in contrast to the previous flight the first pair of motors ignited by command almost simultaneously.

Recall that to increase the rocket flight time two engines ignite on the ground, and two more — after completion of the first pair burning.

The rocket ascended steadily for two seconds. Then one of the motors exploded. It just exploded: later we found all the debris, including parts of the defective motor, which indicate it was not a burnthrough at any one point, but rupture of the entire body.

The tail section began to disintegrate, but for a split second before the destruction the control system detected a drop of thrust, which occurred due to the motor explosion, and considering that the motors finished nominally ignited the remaining two motors. Then the tail section was destroyed, the CS power was lost, and only motors, in the best traditions of the rocketry newsreel, scattered across the sky leaving white trails. 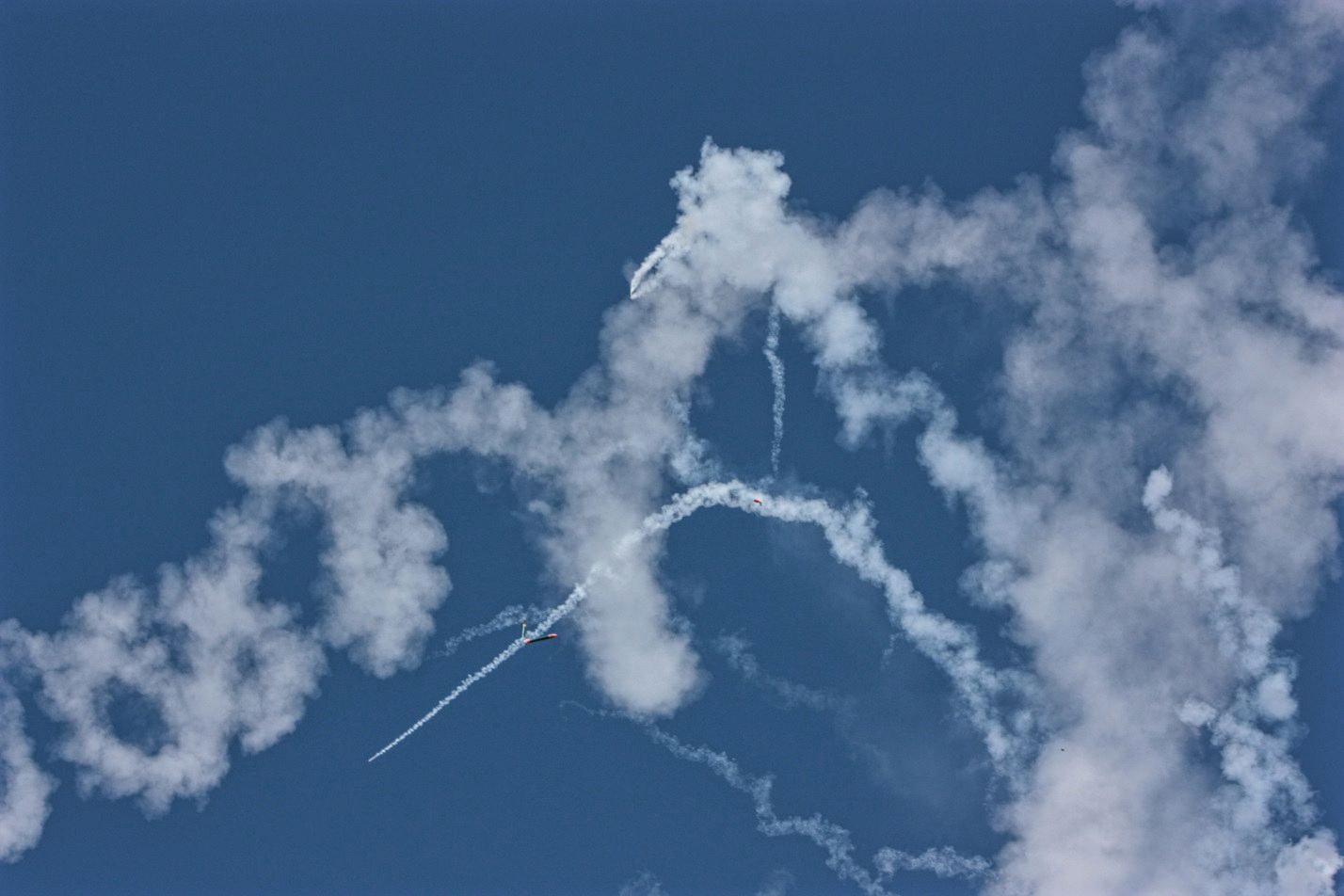 We have managed to retrieve data from the CS, as the flash memory was not affected by the explosion and falling. 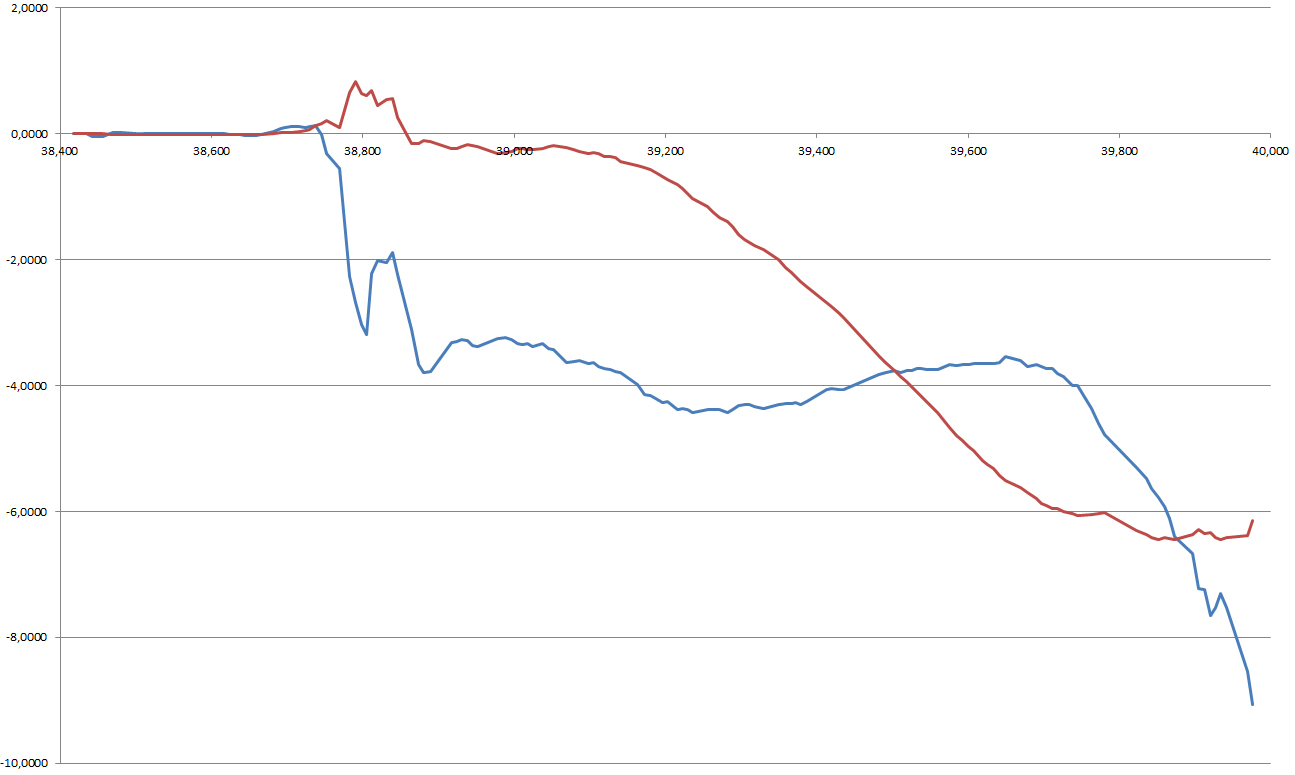 At T+38.8 s the rocket clears the rails and starts leaning — no effect of control is seen on the red graph. Most likely, either the airflow is too weak or the rudder deflection angles are insufficient. The blue graph shows oscillations, but they probably reflect the static stability of the rocket rather than the CS actions. At T+39.7 s the explosion occurs (blue line goes down sharply).

Below is a separate graph for the roll angle (rocket rotation about the longitudinal axis). 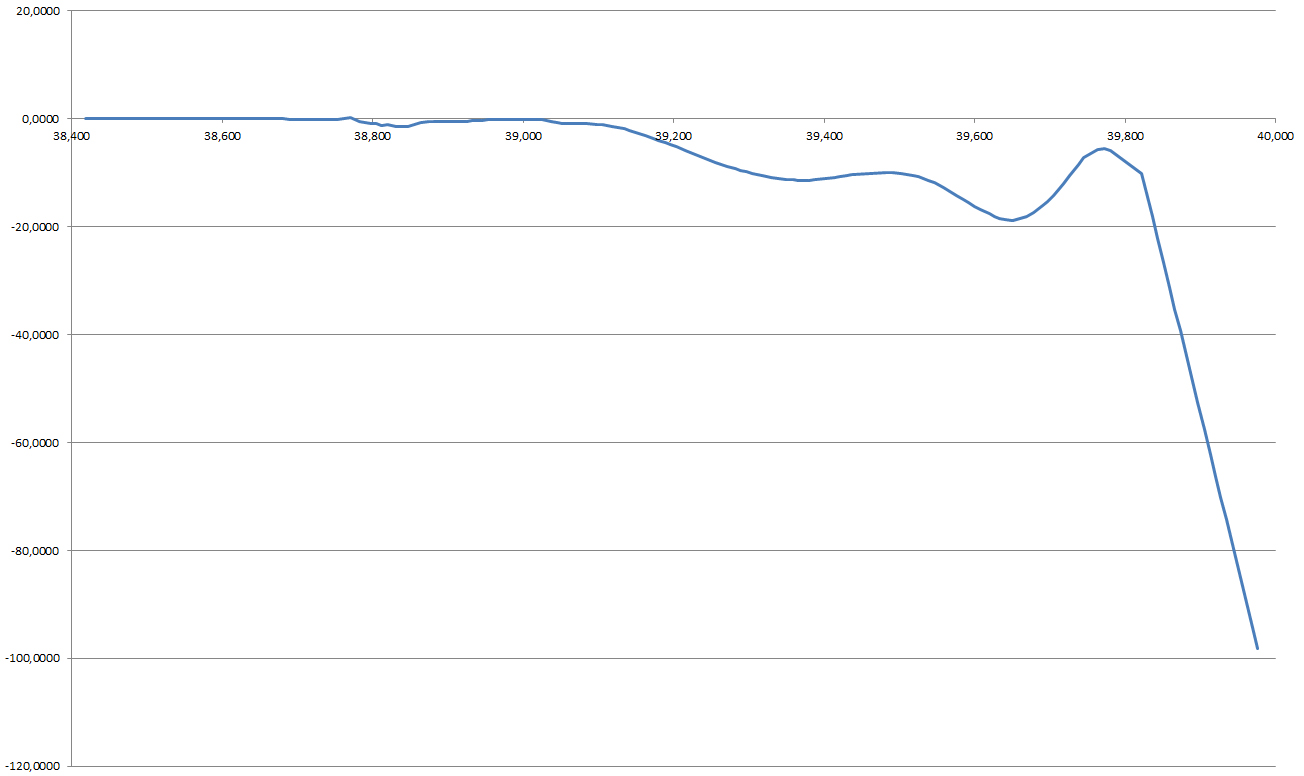 The graph shows that the CS was attempting to turn the rocket back to the initial state. The roll control was more successful than the control about the other axes, probably because just small deflections are sufficient for the roll control. This information was used for tuning the CS for the subsequent flying testbeds.

On April 29 we launched two more rockets having the CS developed and manufactured completely inside Lin Industrial.

First we launched the rocket with four engines, like the Arduino-controlled rocket. Externally it is distinguished by its gray CS compartment. 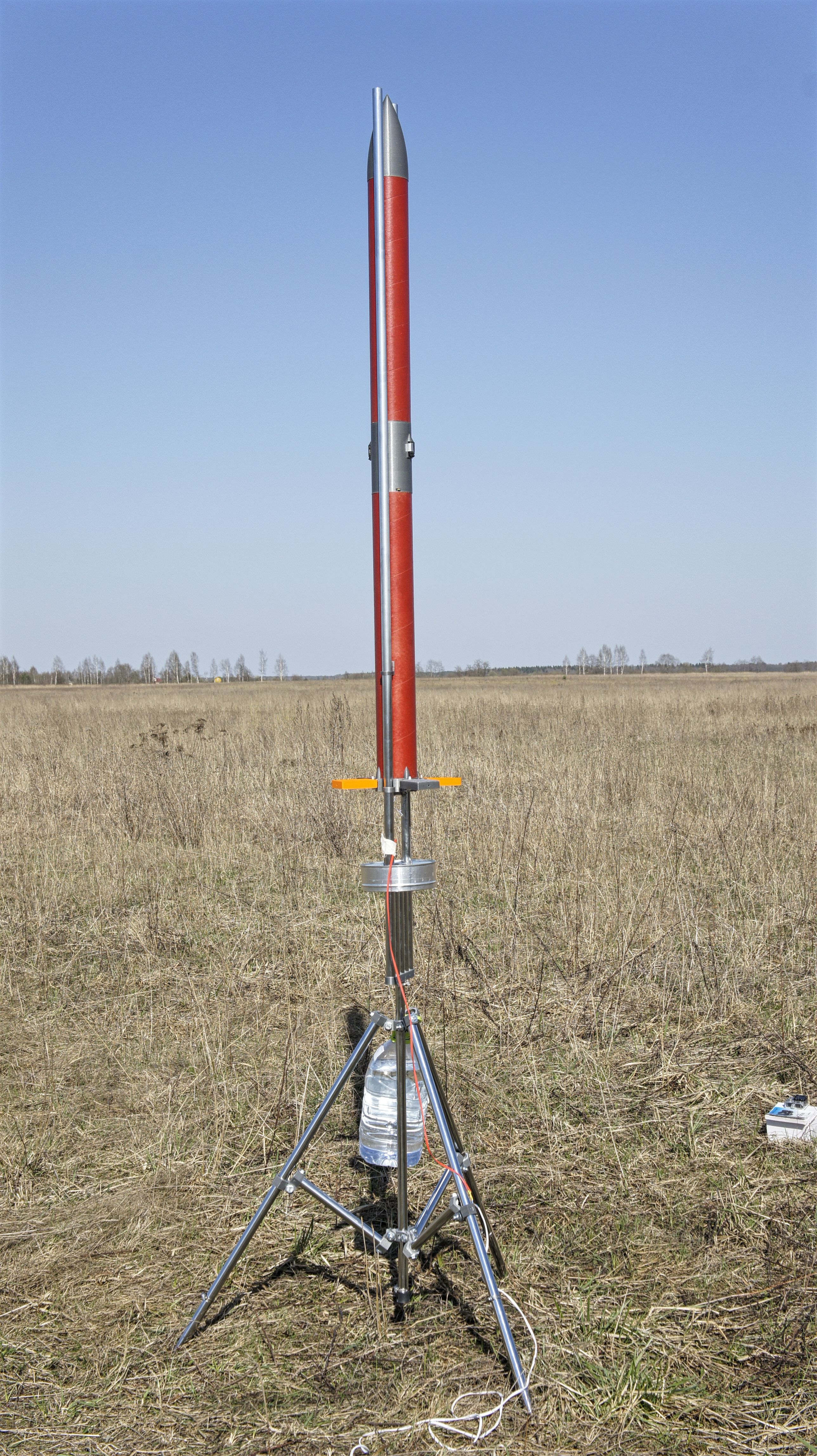 Unfortunately, the flight revealed a purely algorithmic error. When transported, the grid fins inevitably rotate, so before the launch we set them manually to zero angle, i.e. horizontally. We did not mark the fins to define top and bottom, and this time during the transportation the fins rotated too much — and it was impossible to figure out which side is normally top, and which one is bottom. As a result the fins were set horizontally, but incorrectly — not to 0, but to 180 degrees. Early in the flight the rocket started to return them to zero, and deflected the fins, causing the spin, significant overload and disintegration of the rocket approximately on the 3rd second into its flight. 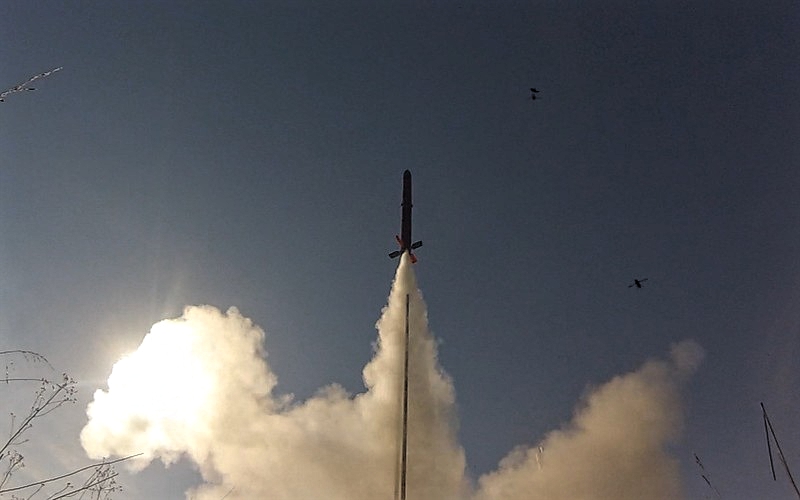 There are two ways to correct the error:

The graph below shows the ascent altitude as measured by pressure sensor. 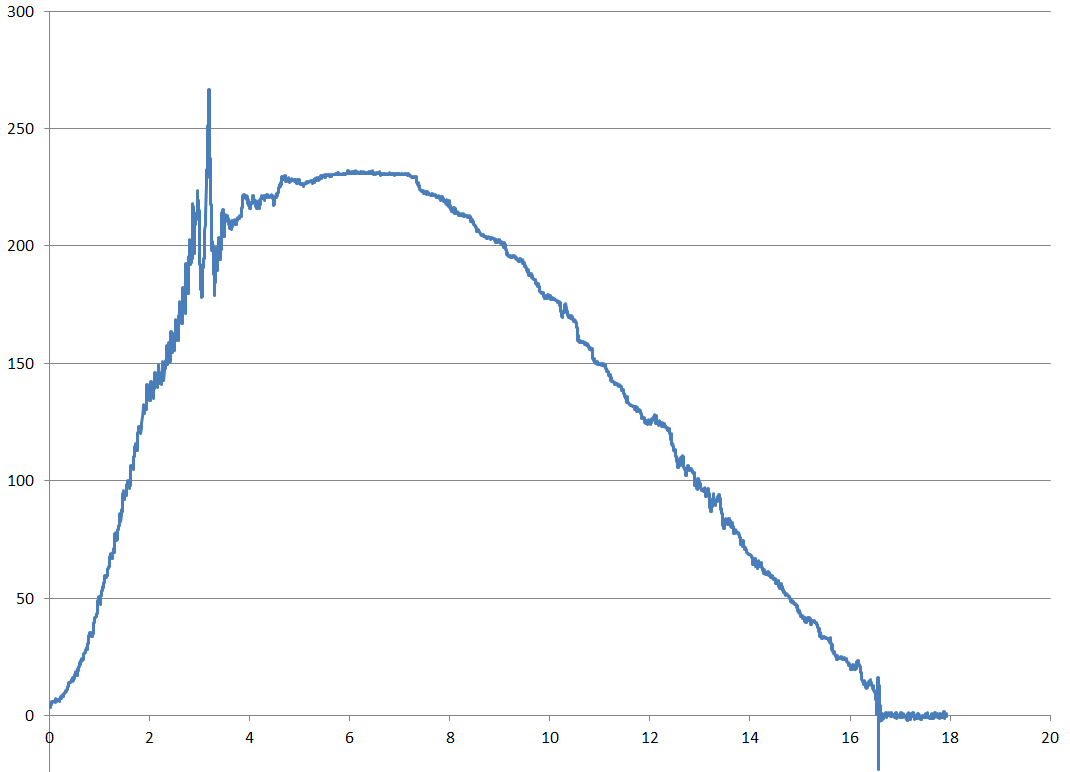 The powerful disturbances on the 3rd second coincide in time with the moment of the rocket disintegration. The second pair of motors did not ignite, and the parachute was not deployed, probably due to disconnection of the igniters from the CS.

However the rocket continued its ascent and reached an altitude of 228 meters on the 6th second into the flight. The flight lasted 16.56 seconds since the beginning of the liftoff. Below is a graph for the longitudinal acceleration, measured by internal and external accelerometers. 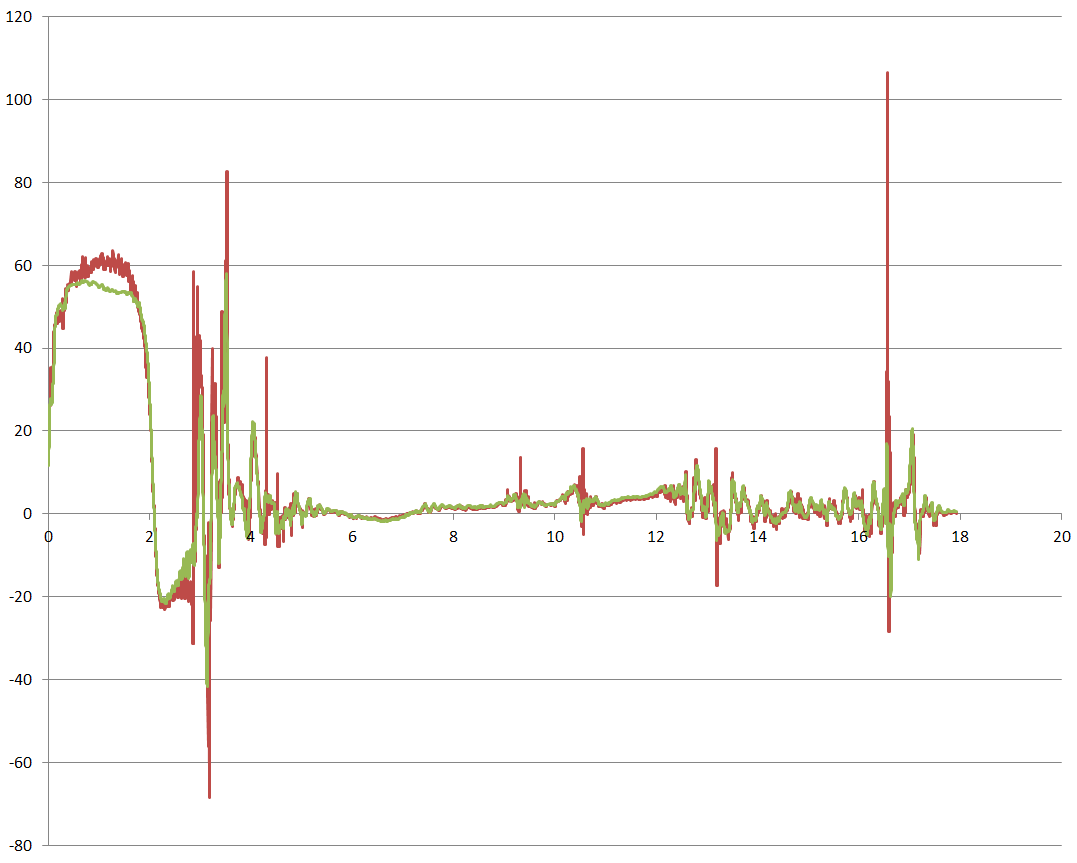 The data coincide in general, but since the internal accelerometer has a sensitivity limit of 5.25g (51.5 m/s2), while the external one has 16g (157 m/s2), at the moments of peak acceleration (e.g. due to motors burning on the first second into the flight, or when hitting the ground on the 16th second) the internal sensor went off-scale, and only external sensor data were reliable.

However the flight brought positive results as well.

First, an undocumented effect was reliably detected for the MEMS gyroscope we use — acceleration along the z-axis affects the temperature sensor readings. The impact is small — about 0.12 degrees/g, so it was not detected during the tests indoors. For testbed flights the effect is negligible, but it needs to be taken into account for a space launch vehicle.

Second, data were successfully obtained for adjustment of the control coefficients for the grid fins (simply put, we have managed to understand the dependence of torque generated by a rudder on the speed of the airflow and the rudder deflection angle). In future flights it will make the control faster and more precise, and the flight will be more stable.

To understand how to compute the coefficients, let's look at the graph below.

The graph shows the angular acceleration about the longitudinal axis of the rocket, divided by the velocity head, for the brief period when the rocket has already cleared the rails, but the roll gyroscope is not off-scale yet. If we determine the moment of inertia of the rocket and the average torque of the rudders, then we can calculate the torque generated by the rudders about all three axes. The calculations showed that the absolute value of controlling force applied to a rudder is 10 N at the speed of 17 m/s and the rudder deflection angle of 40 degrees (the critical angle of attack for a grid fin — above 40 degrees the force does not increase, but decreases). According to the results of calculations we will reduce by 2 times the control coefficients for pitch and yaw, and by 4 times for roll.

We determined the moment of inertia of the rocket using a model created with KOMPAS-3D software.

Finally, the third flying testbed was launched with only two engines (it is visually distinguished by its orange CS compartment). 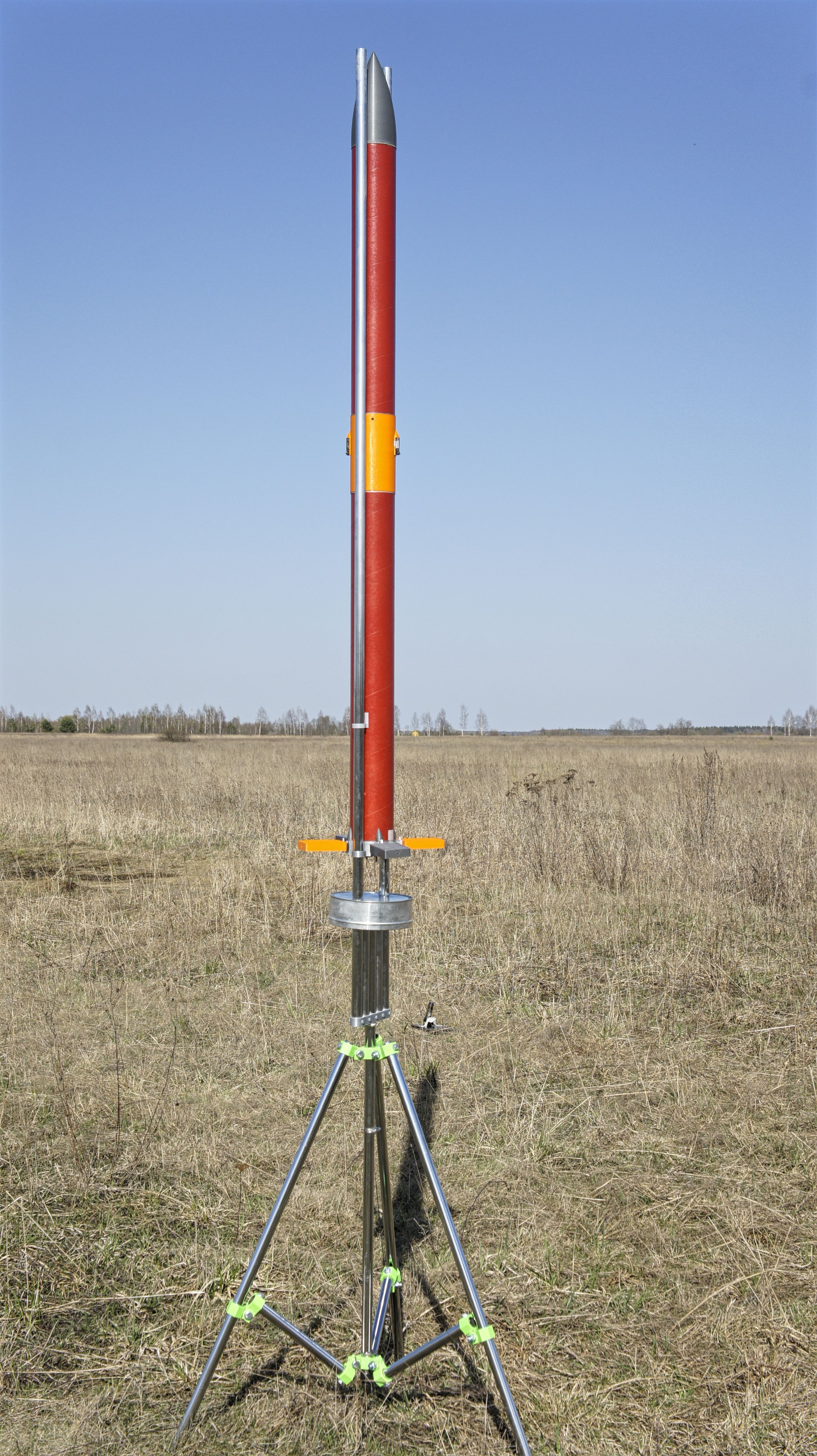 During the rocket flight pitch and yaw maneuvers were seen. The rocket was probably attempting to compensate for wind. Unfortunately, the control system was damaged for yet unknown reason, and recorded unintelligible data array instead of normal data.

After these three launches we can conclude that at the beginning of the work we made overly optimistic estimate for the control system development time. Actually we need 20–30 more flights to get a working prototype.