To ensure self-ignition of propellants of our liquid-propellant rocket engine, we have developed a special catalyst technology. Note that RDL-100S Atar rocket engine burns high-test peroxide (85-90%) and kerosene (TS-1).

The catalyst is located in a special chamber of the engine, into which the peroxide is fed as a liquid. The peroxide gets decomposed and enters the combustion chamber of the engine as heated steam and gas. Droplets of kerosene, produced by the fuel injectors, ignite directly from the mix of steam and gas. This is how everything should work in theory, which is to be confirmed during the upcoming firing.

Our early plans didn't include the synthesis of catalyst. We expected to purchase it from Department 202 of MAI or from companies of the industry. However they've had some difficulties with selling a component we needed so much.

Ultimately, we've had to create our own small laboratory for peroxide works and start our own experiments.

We have created two kinds of catalyst. 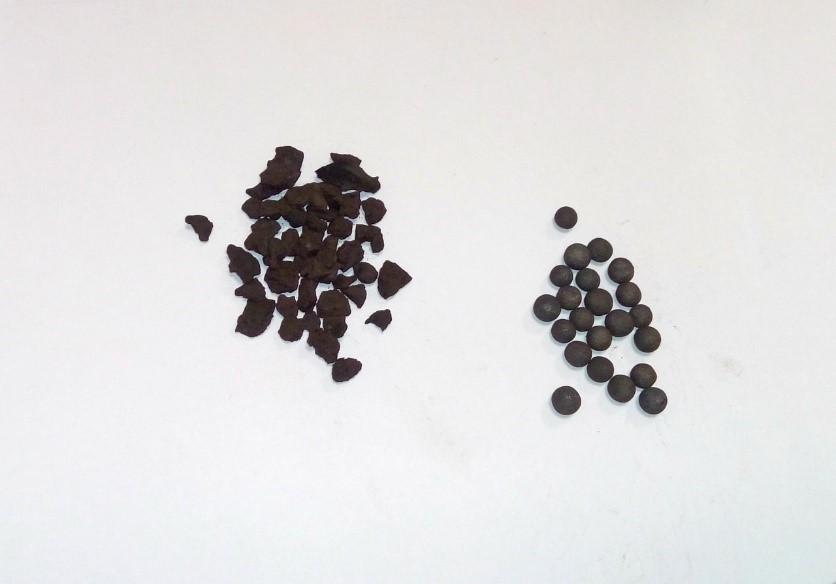 The first option (A) is using heat-resistant porous pellets of active aluminium oxide from AquaChem company as a filler for catalytically active potassium permanganate, potassium manganate and manganese dioxide.

The second option (B) is using as a filler catalytically active porous sodium ferrite, which can be synthesized with self-propagating high-temperature synthesis (SHS) method.

The synthesis goes as follows:

Having obtained both catalysts, we started the testing. First we examined the reaction with 37% hydrogen peroxide.

40 ml of 37% hydrogen peroxide was added to 4 grams of catalyst. Visually, the decomposition occurs very rapidly for both catalyst A and B. After the decomposition was completed the catalysts were washed and subjected to retesting procedure, which was repeated 4 times.

Catalyst A activity was observed to decrease noticeably, unlike catalyst B.

Next we moved on to reaction with more concentrated 50% hydrogen peroxide.

10 ml of 50% hydrogen peroxide was added to 1 gram of catalyst. The decomposition goes very rapidly for catalyst A, while for catalyst B it occurs explosively. Like for the previous test, it was shown that catalyst A activity decreases noticeably when compared to catalyst B during their retesting after washing.

So, the experiments have shown that sodium ferrite catalyst (option B) is more active and apt to preserve its activity when reused. Perhaps this is due to the particular chemistry of sinter grains, where catalytically active ferrites can be formed, and maybe even chemically active ferrates - "iron" counterparts of permanganate.