1. The rocket became two-stage. Two RD-1-300-0 solid rocket motors manufactured by a Russian company Real Rockets are installed into mounts on the tail section. The mounts are pink colored (by the way, all contrast colored parts are made with a 3D printer). Both side motors ignite at launch, then at T+1.75 s the core motor of the same type ignites. Since RD-1-300-0 burns for 2.5 s, the core motor reaches nominal thrust just when the side motors stop producing thrust. Due to the staged design the powered flight duration is increased to almost 5 s. That's enough to verify the flight control system and adjust the coefficients of the control equation.

2. We abandoned using a commercially available controller for flight control and switched to our own flight control system - besides controlling the grid fins and recording data from sensors, it also starts the core motor in flight and deploys the parachute.

3. The grid fins are now almost bell-shaped rather than rectangular.

They were not made by milling the acrylic glass, but printed with a 3D printer.

Now to the test results.

Figure 1. Acceleration along the longitudinal axis (g) in time (s)

Interval from T+0 to about T+2 s corresponds to the burn of the first stage motors. Then the second stage motor ignites. Due to some features of the flight control system design the acceleration data briefly stopped coming (short horizontal segment on the curve). Then the second stage worked, gradually decreasing its thrust (until about T+3 s). After that the second stage continued to produce remaining thrust with pushes until T+4 s. Then the rocket ascended decelerating gradually due to gravity and air drag. After about T+5 s it started descent and landed at about T+14 s.

Figure 2. Flight altitude (m) according to the barometric pressure sensor 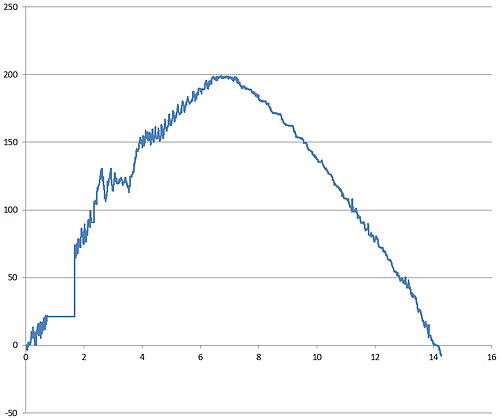 Let's turn to how the flight control system worked - and, noteworthy, it worked nominally in general.

First let's consider the roll control or, simply put, control of rotating the rocket about the longitudinal axis.

In this test, like in the previous one, we locked one pair of fins and controlled only the second pair.

Just as in the previous flight, the fins were trying to slow the rotation of the rocket caused by the imbalance of thrust of the first stage motors (despite the fact that in theory both motors would ignite simultaneously, in reality there is always a delay between them) and by the spin of the rocket after clearing the launch pad (in the future we will improve the launch pad - the rocket will start vertically between two rails). The rocket cleared the launch pad at T+0.4 s, then the flight control system reduced the roll angular rate to almost zero before T+1.0 s, but then the core motor developed full thrust, and the rocket started spinning again.

The roll angle reached 208 degrees (relative to the initial rocket attitude) at about T+1.3 s into the flight. At this moment an overflow occurred. The fact is that the roll angular rate is represented by four bytes in our flight control system, while only lower three of them were used by the code for commanding the actuators. This was done for the code optimization. The flight control system was assumed not to allow such a high roll angle.

Due to the overflow the flight control system became disoriented and allowed too fast spinning of the rocket - with angular rate of 327 degrees/s. The gyroscopes were not designed for such a rapid rotation and therefore got saturated. This occurred at T+2.089 s.

Nevertheless the system was operating nominally until the saturation.

While in the previous test the flight control system was trying to stabilize the rocket only about the roll axis (in other words, trying to stop the rotation about the longitudinal axis of the rocket), in this test it was turning the fins so as to stabilize the rocket both about the roll and pitch axes (that is to stop its rotation in a plane passing through the longitudinal axis and perpendicular to the ground, that is to the local horizon plane).

As shown in Figure 4 (below), until T+2 s the flight control system kept the pitch angle within ±10 degrees. Then, as we noted earlier, the core motor ignited and something went wrong.

Yaw angle was not controlled in any way. In the following flights the control system will steer with all four fins to stabilize the rocket about the yaw axis as well.

Key conclusions after the flight test:

1. The flight control system really works and stabilizes the rocket. Obtained flight data will allow to adjust the coefficients of the rocket control equation and make flight more stable.

2. Software and hardware errors were identified in the control system: wrong criteria for the parachute deployment, absence of protection from a short circuit, ignoring the most significant of the four bytes of angular rate by the code when issuing commands to the actuators. The errors are not critical by themselves in terms of control, but can easily turn a successful flight into unsuccessful. The errors will be corrected.

3. Minor technical errors. Launch pad enhancement is required - the rocket will be launched from two rails, rather than one, to improve stability. Besides, it became cold in Russia, hence the batteries of all the systems discharge faster. They will be additionally checked for charge level and thermally insulated before launch.

Finally, a few shots of the rocket test flight.