Lin Industrial CTO Alexander Ilin prepared a spaceflight development forecast for the Russian edition of Popular Mechanics magazine. The section named '5 Scenarios for the Future' (#4 2016, Russian edition) includes only a part of the article. Here we publish the full version.

At the beginning of the next decade, humans will return to cislunar space during the implementation of the Flexible Path strategy by NASA. New American Space Launch System (SLS) super heavy-lift launch vehicle, whose maiden flight is currently expected in 2018, will help with that. The first version has a baseline payload capacity of 70 metric tons, later versions have capacity of up to 130 metric tons. Note that the Russian Proton vehicle only has a payload of 22 metric tons, new Angara-A5 — about 24 metric tons. Government funded Orion spacecraft is also being built in the United States. 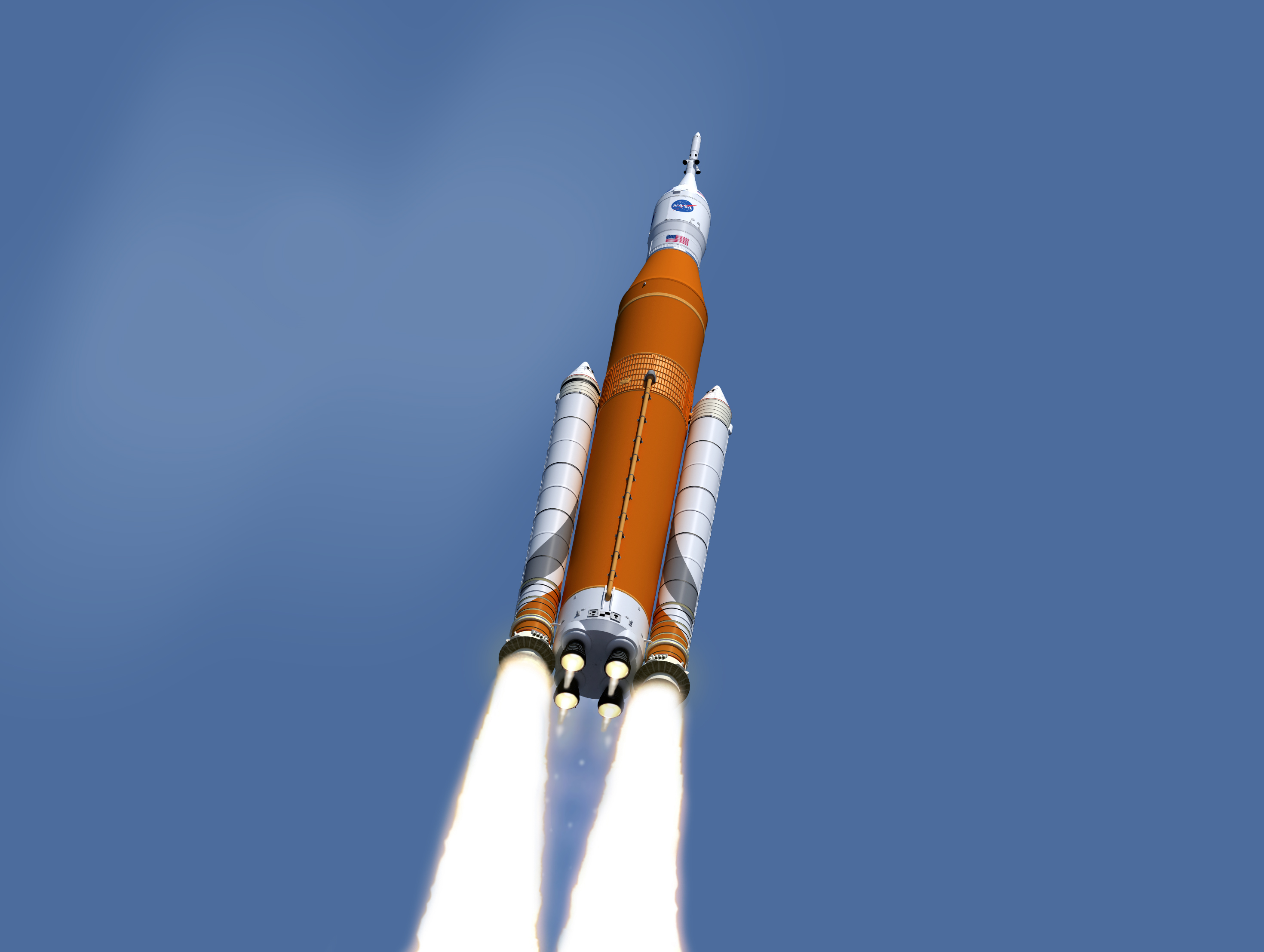 Private American companies will provide the delivery of astronauts and cargo to the ISS. Initially there will be two spacecraft, Dragon V2 and CST-100, others will join them later (possibly winged designs — Dream Chaser, for instance, as both cargo and manned versions).

The ISS will be operated until at least 2024 (and possibly later, particularly the Russian Orbital Segment).

After that NASA will announce a request for proposals for a new station in low Earth orbit, and the winning proposal will probably be a project of station with expandable modules from Bigelow Aerospace.

By the end of 2020s, the presence of multiple private space stations for different purposes in Earth orbit can be predicted (ranging from space tourism to orbital assembly of satellites).

By using Falcon Heavy launch vehicle (with a payload capacity slightly above 50 metric tons, sometimes classified as super heavy-lift vehicle) and Dragon V2 spacecraft, built by the company of Elon Musk, tourist flights to lunar orbit are quite possible — not just flybys, but work in lunar orbit — near the mid-2020s.

Also near the mid-2020s NASA will probably announce a request for proposal for creating lunar transport infrastructure (private expeditions and private Lunar base). According to recently published estimates, private companies will need about $10 bln of government funding for the return to the Moon in the near future (less than 10 years). 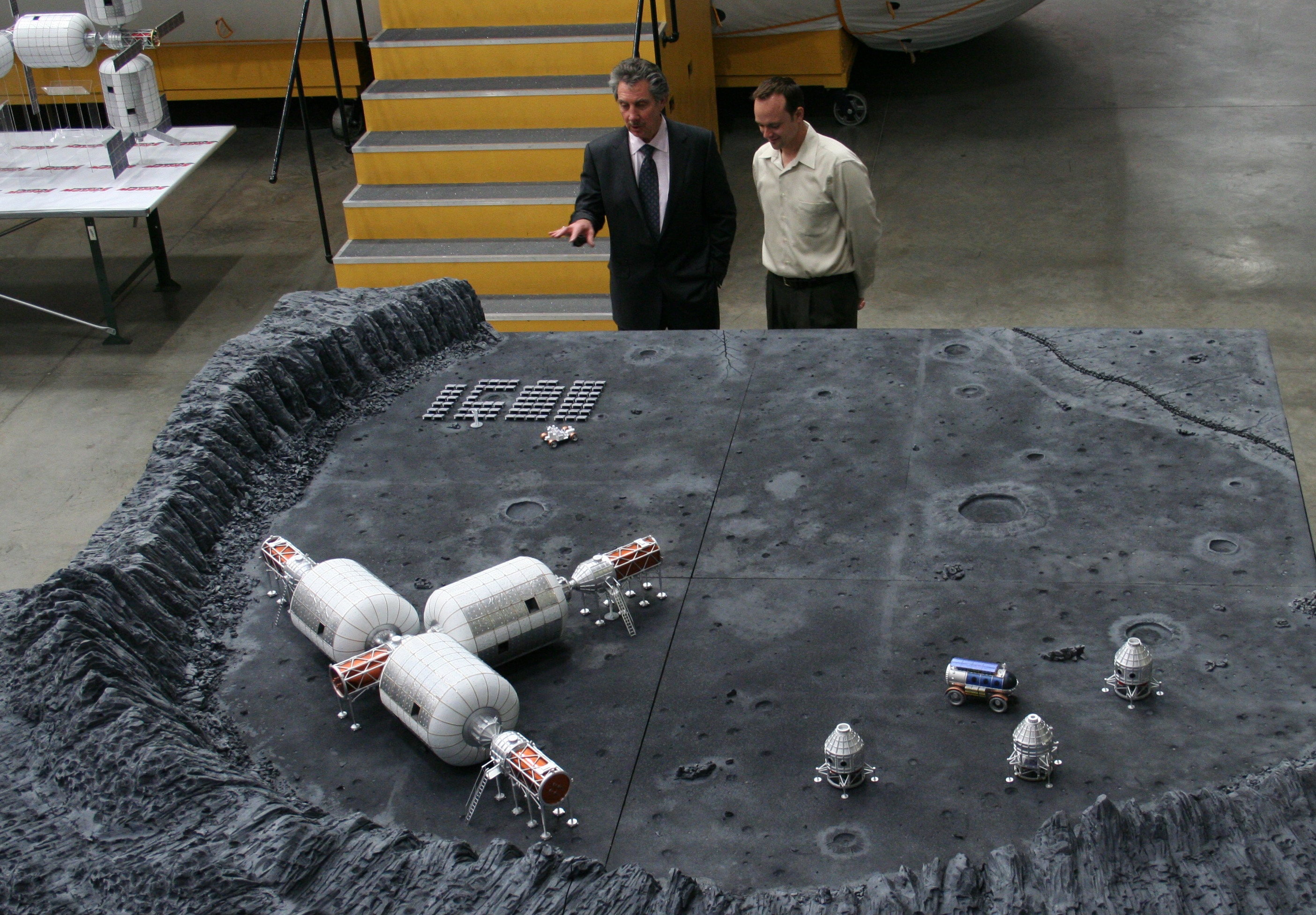 Therefore, the Flexible Path leads NASA to Mars (expedition to Phobos is expected in early 2030s, and to the surface of Mars only in 2040s, unless there will be a strong impetus from the public), while private companies will get low Earth orbit and even the Moon.

Furthermore, new telescopes will be put into operation, allowing not only to find tens of thousands of exoplanets, but also to directly observe the spectra of the atmospheres for the nearest of them. I would suggest that before 2030 some new evidence will be obtained for the existence of extraterrestrial life (oxygen atmosphere, IR signatures of vegetation, etc.), and the Great Filter and Fermi paradox issue will rise again.

New probes will fly to asteroids, gas giants (to the Jovian moon Europa, to the Saturnian moons Titan and Enceladus, and to Uranus and Neptune as well), first private interplanetary probes will appear (Moon, Venus, and possibly Mars and asteroids).

Discussion of asteroid mining will remain just discussion before 2030. Except that private companies will conduct minor technological experiments in partnership with government agencies.

Systems for suborbital space tourism will start flying frequently — hundreds of people will visit the edge of space.

China will finish building its modular orbital station in early 2020s, and by the middle or the end of the decade will make a manned circumlunar flight. It will also launch many interplanetary probes (e.g. Chinese Mars rover), but will not become the leading nation in spaceflight. Though it will be the third or fourth behind the United States and major private companies.

Russia, at best, will retain its "pragmatic spaceflight" — communication, navigation, remote sensing of the Earth, and the Soviet heritage in human spaceflight. Cosmonauts will be flying in Soyuz spacecraft to the Russian Orbital Segment, and once the United States leave the ISS program, the Russian Orbital Segment will probably form a separate station — much smaller than the Soviet Mir station, and even than the Chinese station. But this will be enough to save the industry. Even in launch vehicles Russia will become third or fourth. Though this will suffice to carry out the tasks of national economic importance. In the worst-case scenario, human spaceflight will be stopped in Russia after the ISS operation ends, while in the best-case scenario a new lunar program will be announced with realistic deadlines (rather than the mid-2030s) and clear monitoring of its implementation, allowing to conduct Moon landings as early as in the mid-2020s. But alas, this scenario is unlikely.

New countries will join the Space club, including some with human spaceflight programs — India, Iran, and even North Korea. And that's not to mention private companies: there will be many private manned orbital spacecraft by the end of the decade, though hardly more than ten.

Many small companies will create their smallsat launch vehicles. And some of them will gradually increase the payload, thus coming into the middle and even heavy-lift class.

No fundamentally new launch vehicle will appear, humans will be flying in rockets, though the first stage reuse or engine recovery will become usual. Probably, experiments with reusable aerospace systems, new propellants, structures will be conducted. Possibly by the end of 2020s a new reusable single-stage-to-orbit (SSTO) launch vehicle will be created and start flying.

Part Two: Transformation of mankind into spacefaring civilization — from 2030 to the end of the XXI century

There are a multitude of bases on the Moon — both public and private. The Earth's natural satellite is used as a resource base (energy, ice, various components of regolith), test and research range for proving space technologies for long haul flights, infrared telescopes are located in shadowed craters, and radio telescopes are on the far side of the Moon.

Moon is incorporated into the Earth's economy — energy from lunar power plants (fields of solar panels and solar concentrators, built from local resources) is transmitted both to Earth-orbiting space tugs, and to Earth. The problem of materials delivery from the lunar surface to LEO is solved (aerobraking and aerocapture). Lunar hydrogen and oxygen are utilized in Moon-orbiting and Earth-orbiting refueling stations. Of course, these are just early experiments, yet private companies are making their fortune with this. Helium-3 is extracted only in small quantities as yet, for experiments with fusion engines.

On Mars there is a research station-colony. It is a joint project of private companies (mainly Elon Musk) and governments (mainly the United States). People can get back to Earth, though many of them migrate to the new world for good. Early experiments on possible terraforming of the planet. On Phobos there is a transit base for heavy interplanetary spacecraft.

Across the Solar System there are a multitude of space probes, the purpose of which is a preparation for the development and search for resources. Missions of high speed probes with nuclear electric powerplants to the Kuiper belt and to the recently discovered ice giant - the ninth planet. There are rovers on Mercury, balloon-type, floating and flying probes on Venus, exploration of the moons of the giant planets (e.g. submarines in Titan's seas).

Distributed space telescope networks allow to detect exoplanets through direct imaging, and even to map (with low resolution) the planets orbiting nearby stars. Large automated observatories are sent to one of the foci of the solar gravitational lens.

Heavy interplanetary manned spacecraft not only reached Mars and ensured the deployment of a colony on the Red planet, but also they are busy exploring the asteroid belt. Numerous expeditions are sent to near-Earth asteroids, a mission to Venus orbit is accomplished. Preparation for the deployment of research bases near the giant planets Jupiter and Saturn has started. The giant planets will probably become the destination of the first test flight of an interplanetary spacecraft with magnetic confinement fusion engine. 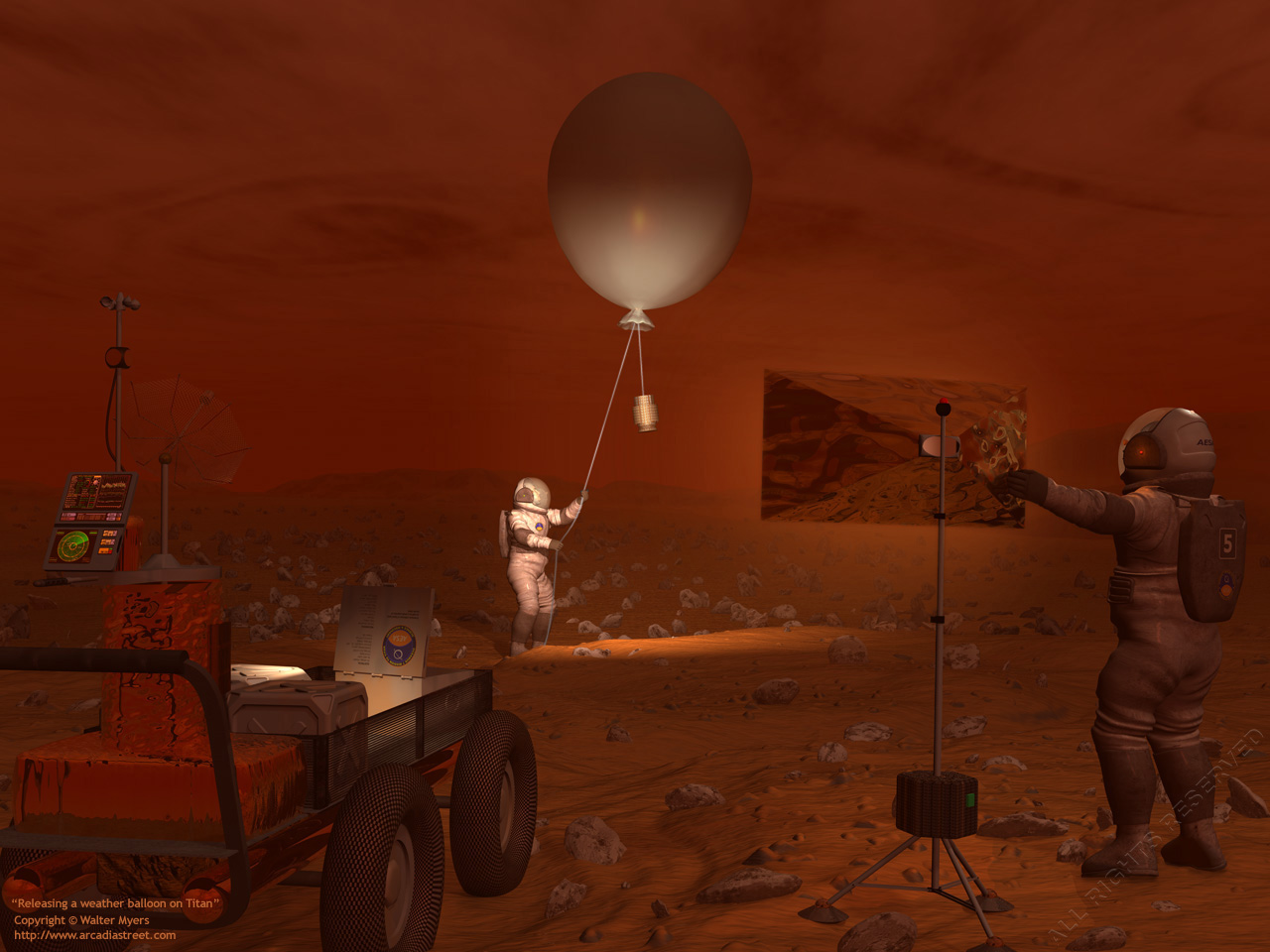 Advances in biology are widely used in spaceflight, since genetic engineering techniques solve many problems caused by weightlessness and radiation. Adaptation to the new conditions (lower gravity of Moon and Mars) becomes faster. Life support systems with high degree of isolation (95–98% of mass) have been created. Synthetic life is under development — "vacuum flowers", extracting valuable resources from asteroids.

Part Three: Bright Space Future — the XXII century and beyond

On Mercury mass drivers launch resources, near-Sun lasers are used to transmit energy across the Solar System and accelerate solar sails — early probes are sent to Oort cloud and the nearest stars.

Millions of posthumans live and work in outer space (appearance of many of them is very different from that of the average human).

There are tens of thousands of inhabitants in floating cities of Venus. Genetically engineered colonists are able to work on the surface of the planet in light environmental suits. Experiments on terraforming of the planet are conducted.

In outer space, at Lagrangian points near the Moon there are bases for interplanetary spacecraft, O'Neill cylinders (colonies), telescopes, military platforms.

There are giant cities beneath domes, as well as factories, power stations on the Moon.

The first stage of terraforming Mars is complete — on its surface one can stay wearing an oxygen mask, and liquid water is present. Dust is removed from the atmosphere. The new Martian sky is dark purple.

In the asteroid belt there are giant shipyards, factories, city-colonies inside asteroids. Active mining of resources (which are generally consumed right there) is under way. 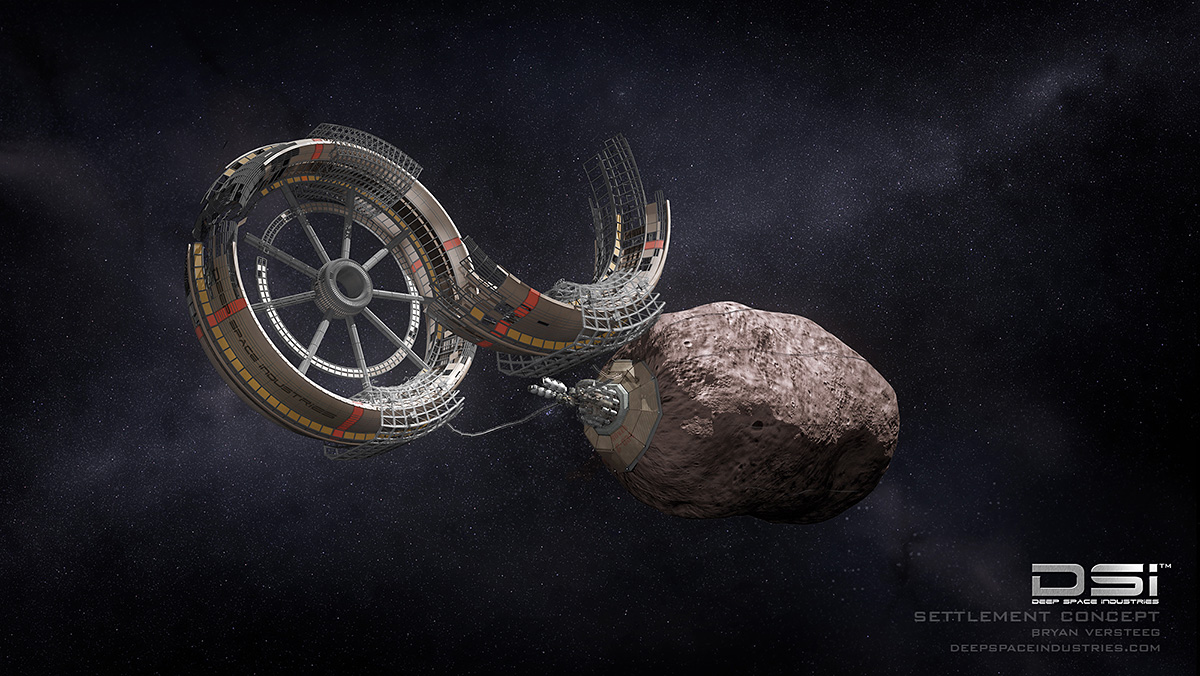 Below the radiation belts of Jupiter there is a torus-shaped research orbital station with hundreds of scientists working there. Temporary bases are present on Jupiter's moons as well.

On Titan near Saturn there are major bases, virtually colonies. Helium-3 is actively extracted from the atmosphere of Saturn.

Minor research bases are operating around Uranus and Neptune. Active research is under way in the Kuiper belt — a dozen of heavy interplanetary spacecraft with fusion engines are working simultaneously.

Earth is gradually transformed into a nature reserve — there are more and more stringent laws and quotas. Most of the industry moved to the Moon, to orbit, to asteroids. On Earth, there are ordinary people, those who for religious or other reasons want to grow old and die here.

Equatorial orbital ring is complete — the problem of cargo delivery from the deep gravity well of Earth is virtually solved.

The next step is to the stars! If the physical laws of our universe don't allow faster-than-light travel, then "embryos and ideologies" will fly in "slow" ships to the stars — at 1/10 of the light speed. The first stage of galactic expansion will be delayed for hundreds of years. However, even thousand years will not seem long for posthumans. New spacecraft will become faster and faster, until subluminals appear, covering interstellar deeps within a few years, and even sooner by their onboard clock.

If faster-than-light travel is possible (for example, with Alcubierre drive), then galactic expansion can begin even before the expansion across the Solar System. Maybe as early as in the XXI century — but that's another story.

Opening title of The Expanse series: a brief sequence of the colonization of the Solar System by humanity